Remember when these larger dishes dotted the countryside, roofs and tall poles around your neighborhood?  Then came the "pizza" size dishes.....and...I was sucked-in at one time, too.  Simple, multiple receivers in multiple rooms, and .....one company to deal-with. Only I did something that MOST people don't today....I literally bought my own equipment, so I was never locked in to a contract.

Today, people sign up for anything that sounds good!  Free HBO? Sure! Free this? Yep!  Free that?  You bet!  Then...comes the two year contract, the requirement to keep your phone line plugged-in to the receiver or an "extra charge" will be charged, and on...and on...and on. Doesn't matter if you're on one small dish system or another. You're "locked-in."  They've GOT you.

Me? I like choice. I still use the big dish...which puts me in the minority. But, I choose my programming, I have NO contracts, and my prices for channels are cheaper, most likely than yours. No, the big dish may not be perfect for you, but it works for me.  But its more important in another way:

Here's where I believe I'm in the majority.  As a consumer, I don't like getting screwed by major corporations. Or any company. Ever look at your utility bills? The fees upon fees? How about your cable/satellite/internet bill? Same thing. I, like you want something simpler. I want choice, and I don't want to be TOLD that I will subscribe to certain channels and services because its what's "out there." THIS concept, I hope is a majority concept. But, its dying. There's a big company called "Motorola" that owns the technology for authorizing us "big dish users"...now down to around 10 thousand strong. That's the equivalent of about everyone in Ionia plus more being on this system. Motorola says, "nope, no more" after December 31st and is shutting down the sending of programming to those of us who bought our own equipment, maintain our own equipment.  A bummer!

Enter a company called "Skyvision", associated with another company called, "SRL". Together, they've been authorizing users of big-dish programming for a long time, and are now working hard to let us, with only a change in software and many signed agreements choose our programming from ONE satellite broadcasting a variety of channels for Comcast.  While this is still "packaging", it's still independent of cable and not "pizza delivered" on a dish that fades in the rain and has contracts of great length. We, the 10 thousand-ish users are some of the last holdouts of what is a GREAT technology, but still a minority.

I hope that after December my big dish is still subscribing through a company like Skyvision or SRL that cares about its customers. Too many other big conglomerates have entered our lives, and...when they take over, we ALL lose. When their system fails, our nation is lost for one type of communications or another. When they want to increase rates, we ALL pay...and what do we get?  Less personal service.

If you are a big-dish owner, you have options. Maybe more options after the turn of the year. You can follow the options at http://www.satelliteguys.us/ and to a lesser degree at www.skyvision.com.  You can also convert your big dish to receive what's called "free to air" broadcasts, completely legal, and with some networks that WANT you to see them, to help make them popular, much like the early days of home satellite TV when we used to go "sky surfing."

Whether or not I'm watching cable networks on my big dish, this whole situation should be a wake up call to anyone concerned with too much large company consolidation and with consumer protection. We all know that big companies don't care about little consumers, they only care about answering to their stockholders, and they do that by getting "subscriber numbers" to go up...when you blindly sign your next two year agreement, whether it's a cellphone, satellite TV, Cable, or internet.
Bottom line:  In some cases, if you own your own equipment, you don't have to be in a contract. ASK!  Don't blindly "bundle" your communications, and then be "in the dark" when the system fails and you can't get on your (internet) phone, cable TV or the 'net. Become and educated electronics user, not another "blind subscriber" with any modern technology. 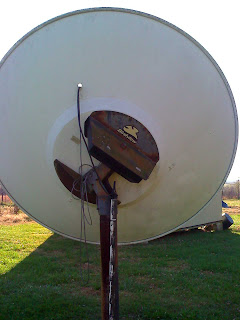 Time to move my big dish over to satellite "W-5" for the night.....and enjoy one of the channels that I selected.

Comments welcomed as always!
And, read my other blog....posted for WION Radio!
Posted by Carlyle at 5:08 PM 1 comment:
Email ThisBlogThis!Share to TwitterShare to FacebookShare to Pinterest
Newer Posts Home
Subscribe to: Posts (Atom)