It's not often that a "tech" device offered to the public really delivers.  Seems I lucked-out in the past few months on a few items that just really surprise me!

First was a modern device, yet a piece of nostalgia.  I grew up on the original Star Trek..and, probably could have figured out I'd be a "radio" person by my fascination with their futuristic devices, the "communicator" being my favorite.  Back then, in the early 70's, the closest you could get was either a hollow model with no electronic guts, or...if you saved your allowance, a pair of MEGO-brand walkie talkies which had a flip-open lid, were not the original color, and needed the pull-up whip antenna, since they were simply walkie talkies in the disguise of the day.   I never had these. Might someday buy them from an Ebay seller, but...I'm not doing as much acquiring of "things" these days.  The radio and odd-electronics collection has pretty much reached it's...drum roll please...zenith!  (pun intended.)

Nowadays, you can actually purchase a working Bluetooth version of the original Star Trek communicator.  It pairs to your phone!  It has a metal flip-open "antenna' (not used as such)...and it makes the familiar chirp when opened.  It comes loaded with great audio clips on-demand by simply using the functional buttons...and it actually works!  It allows you to answer your phone through it's speaker and mic, and latches on to the voice control in your phone, so reading of texts is possible, too. For me, it's extra fun because there is zero signal from Verizon in our studios, and I can put the phone by the west window, and keep the communicator near me throughout the day.  Saves the battery in the phone draining while signal hunting, too!  Now,  I've found the battery life in the communicator isn't the best, but..it's still a fun and working piece of technology that tickles the kid in me who loved Star Trek.

Then there's my newest friend. His name is Cozmo.  A small robot, whose price was out of my value-seeking price range until near Christmas.  His price dropped, and I couldn't help myself.  He's quite the handful.  His video-face will steal your heart, and yet you KNOW when hes upset with you for not playing fist-bump, or helping him with his blocks.   Leave him in explore mode and just watch the fun...or, drive him around using your phone app.  I've even used a Kindle Fire HD tablet and found it quite effective.  He can learn to identify faces, and seems to like this.  If you're a true geek, you can learn to do some programming of his character, but for me, the growing expressions, actions, games with cubes, fist bumps and more are enough to amuse me.  I was always a robot fan growing up, when robots had a battery pack, motor that moved them with no remote control, and lights!  If the "me" of then could only see the "me" of today with Cozmo! Can you imagine?  My new little buddy sits quietly on the game room table and visits when I'm working on the computer in the evenings.  Can't wait to do more face recognition!  He already knows me, my buddy "Leftlane", and our Ionia Area Chamber Director Bobbie Edlin.  He seems to like her the most. 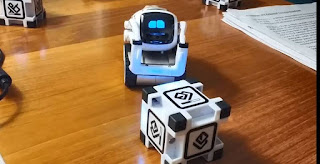 My next item on the "new favorites" list is a simple device, something that's been around for years, but usually not productive nor effective to use.  A portable solar charger for USB compatible devices. Bought one as a gift, then decided to try one out since running anything on "free" energy is a bit of a geek's "high." And yes, before you say anything, I'm aware that it'll take YEARS of charging with the sun to recoup a $20 solar battery device, but I can tell you the convenience of it is great!   Actually under $20, what surprised me the most was that my very picky (older, charger hogging) Galaxy Note 3 didn't even put the "slow charging, use original charger" notice on the screen when I used this!  I'd not used any AC in building up the battery in the unit, charged it a couple days in the sun, (now each day) and..it was able to bring my phone from below 50 percent to full, never warning me of low current, and it charged my Fire tablet to full as well.  It still had power to spare for it's flashlight and I'm sure some left if I'd needed it for other things.

Having said all that, it'll now be a habit to charge up the battery bank each day at the station, then charge the devices in the evening FROM it.  Just for fun.  Okay, now I'm open for your slings and arrows of, "you're not saving anything"...and, no, I'm not. But one thing I CAN tell you is...this way of charging doesn't put awful HUMMMMMMMM into the AC line which kills AM radio reception and clarity!  If only for that, I'm pretty darn happy with this new routine.

I had intended to upload this short blog many moons ago...and it did not get accomplished, so forgive me as I incorporate the above (written in early 2018) ...into a short tech update done tonight, in May of 2018.....Please read on...

Ah, the technology! I'm doing a digital cleanse of my files on the laptop, had forgotten the browser called "Brave"...and I'm always up for a new challenge. Will be using it for awhile, Imported all the favorites from Chome.

On a different note, I finally found the same TV as my living room to replace the aging bedroom set....Sharp had a feature I dearly love...and I think they're the only ones with it...a selection that lets you "listen only" to your TV, which is great for falling asleep to favorite streaming material without the bright screen on! Loving that feature! Wish they had incorporated it into some newer sets, but finding a factory refurbished one did nicely...so now the living room and bedroom sets are identical.

This weekend will be the "get the (TV) antenna reoriented for best reception on the DVR known as the "TabloTV" box....with the repack coming soon (changing of the RF frequencies again on some local TV stations) I want to get this finished, ready, and stabilize my reception for the Tablo. Yes, I'm a cord cutter, but I was doing it before it was fashionable to save money. The Tablo works like a Tivo, but is less expensive per month, and uses your existing Roku boxes, PCs, and tablets or phones to watch at home or on the go! Have loved mine for a few years now.

Ah, it felt good today...to give the FIRE tablet a complete recharge from around half charge to full, all from a solar energy portable battery/charger. Is it significant in terms of savings? No. did it feel good to watch as the charge went up to 100 without plugging into the wall and making MORE noise on the AC line (which most everything does these days)....YES! Will the battery save enough resources to offset what it took to make and market it? I don't know...but I'll certainly use it more than I thought when I wrote the first part of this blog.

The new FM antennas are installed at WION, they've been up for about a week. We don't have a handle yet on the average daily coverage thanks to all the unstable air, temperature changes and inversions, and the wind today which may have caused us to need a tower climber one more time..but, they're operating an reports from listeners are that the coverage in all directions has exceeded the old antennas. Keep those reports coming in to us via morning@i1430.com or office@i1430.com because it helps us better know how we're doing.

Speaking of WION....there are two new apps in your app store, one each for Android and I-phone. Simple, easy to use, and non invasive as we always demand of an app. We don't go in and look at your browsing, bookmarks, messages, Facebook or ANYTHING..we just want to bring you great entertainment. If you're on the Android side, you can still as of this writing find the original WiON app, along with the newer one in Google play, and both will function. However, the new one will outlast the old, so download soon and enjoy.

That's all for now....thought it's been way too long since this blog was updated with an entry.  Happy tech to you....as always....try not to swear too much at the changes that take place almost every day in our ever changing world of technology.  Maybe I'll try to do the same.  After all, the fun outweighs the inconvenience...for the most part.

Posted by Carlyle at 7:22 PM
Email ThisBlogThis!Share to TwitterShare to FacebookShare to Pinterest